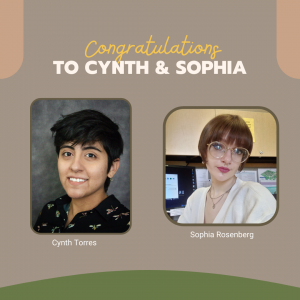 Cynth Torres and Sophia Rosenberg recently won awards at the 16th annual Carolyn and Norwood Thomas Undergraduate Research and Creativity Expo. The expo is a campus-wide celebration of undergraduate research, scholarship, and creative activities. All students engaged in faculty-mentored scholarly inquiry were encouraged to participate. Each student submitted a 4-6 minute video presentation explaining their project.  The video is designed for the viewers and judges (where appropriate) to watch you present as if you were at an in-person session. 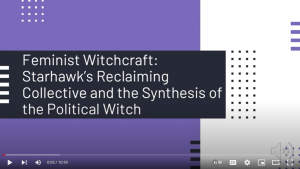 “Feminist Witchcraft: Starhawk’s Reclaiming Collective and the Synthesis of the Political Witch This research project works to explore feminist neo-pagan Starhawk and the work of her Reclaiming Collective in the midst of the late 20th century San Francisco/Bay Area. Through examining the way in which feminist praxis and direct action was implemented in the foundation of star hawk’s works, I aim to not only to present the history of a feminist neo-pagan movement within the U.S., but to also to reveal the ways in which neo-paganism is utilized as a means of political activism. Drawing from both of my disciplines in Religious Studies and Women’s Gender & Sexuality Studies, as well as research into memoirs, ethnographies, and archival data, a major goal in my project is to argue that witchcraft holds potential to complicate our notions of how we understand witchcraft in our modern context.” 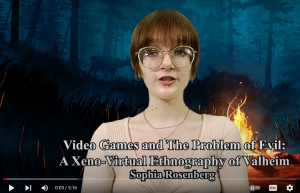 “Ethnography has long been recognized as an effective method to document cultures and the people within them. How can ethnography refigure itself for digital media and the online spaces that surround them, and the newfound cultures that are emerging as a result? Through a grounded, open-ended approach to ethnographic analysis and digital anthropological methods, this project explores using xeno-virtual ethnography as a way to record online cultures and their digital practices through the observation of two servers in the survival sandbox game Valheim. Xeno-virtual ethnographic methods combine (1) virtual ethnography, which takes place online and records digital cultural practices, and (2) xenoethnography, where a main researcher invites a secondary researcher to conduct an ethnography of their group. Besides a better understanding of these gaming cultures, my project rethinks the method of ethnography in relation to social power. The typical method of ethnographic research, as founded in European colonialism, followed the trope of an ethnographer from a dominant group documenting marginalized people that were often seen as inferior. However, due to a much-needed retrospective on the controversial origins of ethnography and the rise of new technologies, the method is taking on a new form.”

Copyright © 2023. UNC Greensboro. All rights reserved. | If you have a disability and are having trouble accessing information on this website or need materials in an alternate format contact smparke3@uncg.edu for assistance.