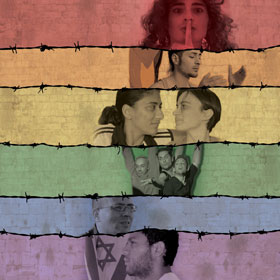 City of Borders intimately portrays the lives of the Israeli owner of Jerusalem’s only gay bar, Shushan, and four Israeli and Palestinian patrons as they navigate a minefield of politics, religion, and discrimination. Set against construction of the separation wall between Israel and the Palestinian territories and the struggle for a gay pride parade in Jerusalem, five interwoven stories reveal complexities in the struggle for acceptance. Directed by Yun Suh, 2009. 66 mins. Shown in conjunction with the exhibition Zones of Contention: After the Green Line.