Puerto Rican-American rapper Hamza Perez pulled himself out of drug dealing and street life 12 years ago and became a Muslim. Now he’s moved to Pittsburgh’s tough North Side to start a new religious community, rebuild his shattered family and take his message of faith to other young people through hard-hitting hip-hop music. But when the FBI raids his mosque, Hamza must confront the realities of the post-9/11 world, and himself. “New Muslim Cool,” an award-winning documentary, takes viewers on Hamza’s ride through streets, slums and jail cells – following his spiritual journey to some surprising places in an America that never stops changing. (–PBS.org)

Omar H. Ali is Professor of Comparative African Diaspora History and Dean of Lloyd International Honors College at UNCG. A graduate of the London School of Economics and Political Science, he studied ethnography at the School of Oriental and African Studies before receiving his Ph.D. in history from Columbia University. He is the author of four books and the recipient of numerous awards, including an Excellence in Teaching Award and a Chancellor’s Recognition of Contributions to the UNCG Community.

Co-sponsored by the Lloyd International Honors College and the Muslim Student Association. 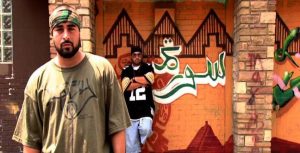