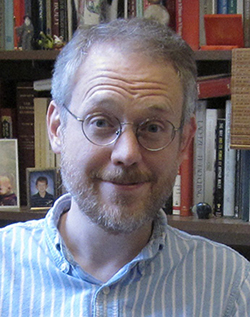 As a student, what drew you to the field of Religious Studies?

I entered UNCG intending to study philosophy, a field that I imagined to be concerned with big cross-cultural questions about beauty, truth, and morality.  I was shocked to discover that the academic study of philosophy, at least in the English-speaking world, had largely turned away from such questions in favor of investigating logic, analyzing the use of language, and generally integrating with the natural sciences.

As a first-year student, I encountered Religious Studies through faculty in that department (Charles Headington, Charles Orzech, Bennett Ramsey, John Sopper) who taught in what now is the Warren Ashby Residential College.  Fresh from my disappointing encounter with philosophy as practiced in the Anglo-American academic tradition, I was elated to see how Religious Studies combined my interest in big cross-cultural questions with materials and perspectives from anthropology, art, history, literature, music, political theory, psychology, and sociology.  I was hooked.  For me, Religious Studies became a comprehensive way of learning about the world, human beings, and the good life.

How has your expertise in Religious Studies helped you define and reach your career and personal goals?

Thanks to the preparation that I received from my mentors in Religious Studies at UNCG, I was able to win admission to graduate programs in comparative religion at Harvard University, the Graduate Theological Union, and the University of California at Berkeley.  After completing my graduate studies, I entered the academic job market at a particularly discouraging moment for humanities Ph.D.s.  Having applied for fifty positions during my first year on the market, I received ten interview invitations and, eventually, two tenure-track job offers.  After accepting one of these offers and teaching in a private comprehensive university for two years, I managed to find another tenure-track position at a private liberal arts college of significantly higher quality, where I received tenure a few years later.  Throughout this time, I maintained an active scholarly program of research, culminating in the publication of one book, two edited volumes, and numerous book chapters, journal articles, and encyclopedia entries to date.

As a graduate student, a fledgling Ph.D., a job applicant, a teacher, a scholar, an author, an editor, and a department chair, I have felt the positive influence of my mentors in Religious Studies at UNCG at every step of the way.  I would not be where I am today without the crucial contributions of UNCG’s Religious Studies department.

Can you recall any experience in Religious Studies that you found especially enlightening or challenging as a student?

“Especially enlightening or challenging” moments in my Religious Studies education at UNCG are too numerous to list, but the following experiences stand out in my memory:

In his freshman seminar on American religious history, Charles Headington required his students to impersonate a famous historical and religious figure as part of a series of classroom debates.  Having chosen the name “Dorothy Day” at random from a list, I went on to discover a seemingly endless series of critical connections between class, ethnicity, gender, politics, and spirituality – all by immersing myself in the biography, thought, and writings of a woman about whom I previously knew nothing whatsoever.

As a way of introducing the cultural background of traditional Chinese religions, Charles Orzech provided his students with a simple lexicon of classical Chinese characters and a brief, Buddhist-inspired Tang dynasty poem, which he then directed us to translate into idiomatic English.  For me, this small taste of Chinese language and spirituality opened the door to a lifetime of teaching and learning about East Asia.

In Bennett Ramsey’s classroom, my classmates and I wrestled with primary sources of continental European philosophy of religion – not an intellectual or literary tradition much noted for its brevity and clarity.  Whenever one of us succumbed to the temptation to free-associate (often beginning with the fatal phrase, “Well, I feel like…”), Ben would remind us of the fundamental basis for all of our conversations: “The text!  The text!”  Occasionally, he would hurl a copy of the actual text onto the floor in the center of our circled chairs, to meaningful and timely effect.

Having discovered the tensions between myth and history in early Christian traditions, I asked Derek Krueger the earnest and highly-charged if sophomoric question: “So, do you think all of this is just made up?”  To his eternal credit as a teacher, he responded: “Well, what do you think?”  Not only did he gently remind me of my responsibility as an intellectual inquirer, but he also helped to guide my subsequent investigation of these two questions with intellectual rigor, scholarly expertise, and humane integrity.

What are your favorite things about the UNCG Religious Studies Department?

Nearly twenty years after I graduated, the department has changed in many ways.  Nonetheless, I sense that what drew me to Religious Studies and kept me engaged in the field during my undergraduate career still can be found in the department: caring, challenging, and expert scholarship and teaching.  The department of Religious Studies at UNCG provides a comprehensive portal into cross-cultural humanities for any student who is willing to do the good and hard work of listening deeply, reading carefully, speaking purposefully, and writing clearly about ideas, institutions, and practices.

Have you stayed in touch with any of the professors or faculty in the UNCG Religious Studies Department?

Since graduating from UNCG, what have you accomplished in your career or studies?

I have attained tenure and promotion at a selective private liberal arts college, where I chair an interdisciplinary area studies department, advise students and student organizations, and teach courses in both Religious Studies and related disciplines.

My publications include the following:

I also have been active as a conference organizer and presenter, editor, and participant in the following scholarly ventures and venues:

What are your long-term goals?

My long-term goals include attaining promotion to the rank of full professor, expansion and publication of my research on the transmission and reception of classical Chinese intellectual and religious culture in ancient Japan, and contributing to the development of sustainable and vibrant curricula in Asian Studies and Religious Studies at my institution.

As a graduate, would you recommend pursuing an academic interest in Religious Studies?

I would recommend Religious Studies at UNCG to any student who is willing to do the good and hard work of listening deeply, reading carefully, speaking purposefully, and writing clearly about ideas, institutions, and practices.