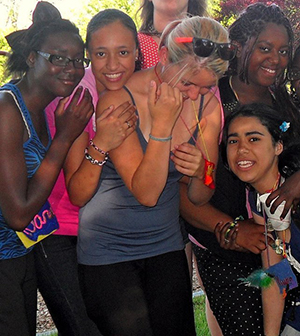 As a student, what drew you to the field of Religious Studies?

Oh. Haha. This is almost embarrassing now! I came to UNC-Greensboro to double major in Psychology and Religious Studies because I wanted to become a “Buddhist Psychotherapist.” I think I had read some book about it as a high school student and it sounded pretty neat and used fancy words that made choosing that as a career seem more exotic than “middle management” or “English teacher”. I wound up losing interest in that career path really quickly. I think I was already laughing about it by the time my first semester ended. It’s not that being a Buddhist Psychotherapists is BAD or anything like that, but it definitely doesn’t fit either my personality or what those respective departments actually teach.

How has your expertise in Religious Studies helped you define and reach your career and personal goals?

Ever since Junior High School I’ve been passionate about issues of social injustice, but I didn’t always have the skills to tackle such heavy topics. The Religious Studies department, without ever telling me what to believe or what decisions to make, taught me how to ask the right questions and how to think critically about the answers I found. Things aren’t always as “cut & dry” as we want them to be, but knowing how to wade through the information is an invaluable skill.

Currently, I teach leadership skills to at-risk high school kids by utilizing contemporary social justice issues, and I wind up using this skill ALL of the time at my job. There’s not a day that goes by that I’m not pushing myself to think about issues from all sides to make sure that what I’m telling my kids isn’t a jumbled mess of one-sided garble. In order for me to teach them how to enact change in their own communities, I first have to teach them how to understand and deal with the complicated situations that they encounter in their day to day lives.

On a practical, knowledge based level, my concrete understanding of different religious practices winds up being really useful. Let me tell you, I have avoided countless awkward social interactions with my very religiously diverse group of youth by knowing even just the basics about their religious beliefs. So far, the only blunder I’ve made is trying to set an appointment on a Friday evening with an Orthodox Jew. I do have one sad story about one my youth, a nice Muslim kid by from the north side of Providence, who actually fought back tears after I recited to him the Five Pillars of Islam. He said it was the first time someone outside of the Islamic community had actually taken the time to understand his culture.

It’s so shocking to me that more people don’t know more about the largest religious traditions in the world. I found out last year that the second most common type of hate crime in the United States is related to religious persecution. It blows my mind that people can here that statistic and still think that learning about religion is a “waste of time”! There’s some basics a person can learn that can have such a big impact on not only their relationships with other people, but their ability to analyze newspaper articles and TV broadcasts as well. There’s a TON of stuff that gets put out by the local media here that I have to bring back to my kids and point out and say, “Look. This statement here? That’s not exactly how I understand their faith to work. Let me tell you what I have learned about …”.  I’m frankly amazed at how much misinformation gets put out there, and how quickly that misinformation spreads!

Can you recall any experience in Religious Studies that you found especially enlightening or challenging as a student?

There are three moments that really stand out for me as being memorable. One was when Dr. Grieve pulled me aside after class one day and asked if I wanted to be a research assistant for the work he was doing with religion and digital media. The second was when Dr. Ramsey pulled me aside after I “peer analyzed” another student’s paper in class and said that I had the potential to be a great professors one day, if I wanted to be one. Thirdly, I remember almost breaking down into tears in a professor’s office because I was having an exceptionally hard time writing the final paper for the class I had with them.

The first was memorable because it was the first in my life that someone had given me a task that simultaneously complimented and challenged me enormously. It was a very high honor for me. I wound up doing undergraduate research not only for him, but for Dr. Bucar as well. The second one was memorable for a similar reason. Dr. Ramsey isn’t really known for being cavalier with his compliments, and the fact that he went out of his way to suggest I pursue a career that I previously thought was beyond my mental abilities meant (and still means) a lot to me. I think both of these instances point to how my professors saw something in me that I honestly didn’t see in myself. I started setting higher goals for myself after that, a habit that I try to continue to this day.

The third one sounds bad, but it was actually a very eye-opening experience. In retrospect, the fact that I was literally almost in tears because I couldn’t figure out how to wrap my head around complex philosophies when I was only a sophomore in college should have been my first indication that I wouldn’t be able to walk away from Religious Studies. It’s obvious to me now, though it was confusing for me then, that I inherently cared very deeply about the topics at hand and I was very passionate about being able to understand those issues and subsequently articulate that understanding. I still feel bad for that professor though. I’m not sure how common it is for students to break down into tears in professor’s offices over something other than bad grades. Hopefully I’m just one of many and not just some loon obsessing over religious theory.

What are your favorite things about the UNCG Religious Studies Department?

Emotionally, the environment was my favorite thing about the department, hands down. The Religious Studies Department, largely due to the faculty and staff that work there, do an amazing job of making students feel welcome while simultaneously challenging them to achieve goals thought to be out of reach. The Department’s faith in my abilities was matched by an equal faith in that whatever I was doing I could be doing better! I loved spending time there and would find any excuse I could to just hang out in the lobby, from studying for an upcoming class or just eating lunch. I probably would have slept there if Pat, the Department Secretary, had allowed me to!

In terms of academics, the emphasis the teachers place on good writing is exceptional. I can’t explain how amazing it was to have so many professors take the time to edit, I mean really edit, my papers. I learned so much in the four years that I was there about conveying my feelings and thoughts in the written word. Most times I would get papers back that seemed to have more comments from my professors than content I had submitted. My writing helped land me the job I have now (I’m always writing our press releases and grant proposals) and it helps me help the kids with their writing assignments. While I’m not the biggest fan of standardized testing, the fact that my writing score on the GRE was in the 98th percentile is certainly indicative of how much time the Religious Studies department dedicates to good writing. Honestly, I’m half-way expecting one of them to jokingly mail this back to me with suggested grammatical edits.

Have you stayed in touch with any of the professors or faculty in the UNCG Religious Studies Department?

Yes! Even though I haven’t seen some of them in years, I still feel comfortable calling them up for advice or the occasional brainstorming session. I always make the attempt to go and get coffee with my professors when I’m back in town, and they’re always receptive to the idea. I’m sure they probably feel awkward about this, but I still reference a couple of them as being my “mentors”. Ya know, in that old-timey sense that implies that they’re full of wisdom and immense knowledge.

Since graduating from UNCG, what have you accomplished in your career or studies?

My biggest accomplishment feels like it’s finishing my applications to Graduate Schools. Honestly, that whole process felt like I had a second full-time job. But on a legitimate note, I direct the summer youth leadership institute and the year round afterschool program here at Rhode Island for Community & Justice. We’re a non-profit dedicated to “fighting bias, bigotry, and racism and promoting understanding and respect amongst all races, religions, and cultures”, and the youth leadership programs that I’m in charge of reflect that mission. I’ve designed a ton of curriculum and led a ton of workshops intended to stimulate dialogue around tough issues of race and religion. I’m definitely known more as an “educator” versus a “community organizer”, but the kids don’t seem to mind my nerdiness. I also teach a class on civic engagement at Midrasha, a local Jewish High School, called “Providing for Providence”. It’s kind of funny, because I’m not Jewish, but they liked me so much and thought I was so familiar with their ideologies that they hired me anyways!

What are your long-term goals?

If all goes according to plan, I’m hoping to be a Religious Studies “lifer” here in the near future. I just finished applying to Graduate Religious Studies programs all across the country, from the University of Santa Barbara in California to Brown University in Providence, RI. The goal is to have my PhD before this next decade is over. I love the work I do now, but I found that I couldn’t just walk away from Religious Studies. Years later I still use “Religious Studies Major” as a way to define who I am and to explain why I think the way I do. I can’t imagine myself doing anything else with my future, really.

As a graduate, would you recommend pursuing an academic interest in Religious Studies?

Most definitely yes, though I tend to warn people that Religious Studies is more difficult than they probably imagine it will be. The questions that Religious Studies wrestles with, due to the nature of Religion itself, are big questions; ethics and morality, power, politics, death, the nature of society and social constructions. Thinking critically about these issues takes a lot of perseverance and bravery, and you’ll probably walk away from the department having more questions than answers. But, if you can learn ways to handle all of these tough questions, you’ll be able to think critically about issues on a level that most people won’t know how to. I’ve already tried to convince a couple of the youth in my program to go to school for Religious Studies. None of them have really “taken the bait” on that one yet, but I keep hoping!